Benchmark pages of AIDA64 Extreme Edition provide several methods to measure system performance. These benchmarks are synthetic, ie. the results show only the theoretical (maximum) performance of the system. In contrast to application tests, synthetic benchmarks do not tend to reflect the “real world” performance of the computer. These benchmarks provide quick and easy comparison between computer states, e.g. when certain parameters (CPU clock speed, memory timings, etc) change in system configuration.

CPU and FPU benchmarks of AIDA64 Extreme Edition are built on the multi-threaded AIDA64 benchmark engine that supports up to 32 simultaneous processing threads. The attained results are scalable either in multi-processor (SMP), multi-core (CMP) and HyperThreading enabled systems. In other words, AIDA64 can utilize the full potential of the current and also the next generation of CPU technologies, such as the hexa-core AMD Phenom II X6, AMD Opteron and Intel Core i7, Intel Xeon processors.

In order to provide appropriate benchmark results, AIDA64 disables the Enhanced Halt State (C1E) and Enhanced SpeedStep (EIST) feature of capable AMD and Intel desktop processors during all benchmark measurement processes. Such features are available in most modern Intel and AMD processors. They are implemented to lower power consumption and heat production by lowering CPU clock frequency and CPU core voltage when the CPU is idle.

64-bit Windows systems are fully supported by AIDA64. All AIDA64 benchmark tests implement both 32-bit and 64-bit variations, and so they are fully capable of utilizing the 64-bit processing capabilities of modern AMD, Intel and VIA processors.

Before starting the benchmarks

Benchmarks are not started automatically, because it’s possible to configure them before starting the actual performance measurement process. On CPU and FPU benchmark pages a new button appears on the tool bar named Parameters.

By clicking on the Parameters button, a dropdown menu appears to configure the number of processors to be utilizied by the benchmark method. 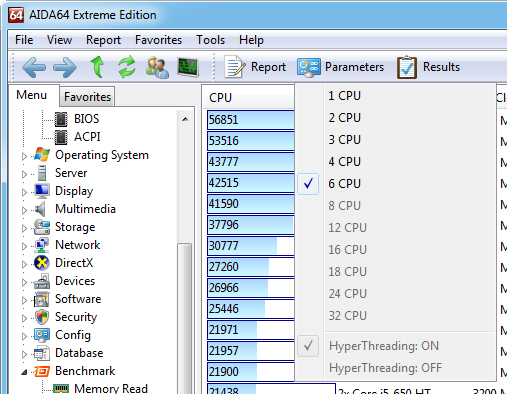 Except for the Memory Latency test, the higher score means the better performance.